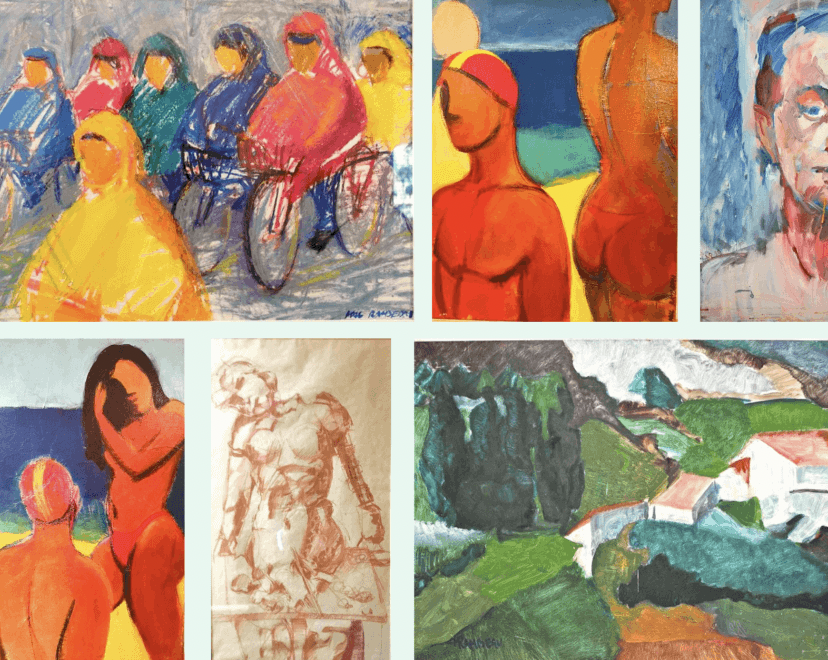 The Alliance Française in Canberra presented its first artist in residency Marc Rambeau and his exhibition “Au Fil du Temps”.

This retrospective exhibition shows the evolution of Marc Rambeau’s painting on various themes with different media over the last 50 years as his life took him around the world. It is a journey of discovery.

Marc Rambeau studied art at the Villa Thiole (French School for Visual Arts) and at the National School for Decorative Arts in Nice from 1961 to 1963. In 1964, he attended the Robert Boell Atelier in Toulon, where he continued his studies.

Marc Rambeau has been a traveller for much of his life and after thorough training in European conventions of art making in France, he has worked in the South Pacific for a number of years as well as in China, where he has studied some of the peculiarities of the Chinese calligraphic tradition and working with tissue papers.

The Alliance Française de Canberra had the opportunity to show the artist’s early work consisting mainly of portrait, still life and landscape paintings. As well as using pencil on paper, Marc works mainly in acrylic or oil on canvas.

Apart from the foundation subjects, there are also works on his homeland France such as the barge on the Seine river, Paris bridge, Notre Dame de Paris, etc.

From 1968 onwards, Rambeau’s work took him to the South Pacific where he lived in New Caledonia, Tahiti, New Zealand and Chile. His works range from island landscapes of Noumea and Tahiti to the people living there.

In 1985 Marc took up residence in Australia and in 1989 he became an Australian citizen.

This exhibition also features paintings of the Australian summer, with the yellow sand beach, the lifeguards wearing red caps, and the ferry arriving in port.

In recent years, Marc has focussed on the landscape of the Australian Outback. His show at the Alliance Française last year was based on a trip to the Flinders Ranges in South Australia and Lake Eyre in the outback which led to Marc’s proposal to be the first artist in residence at the Alliance Française. Marc’s beautiful art works have brought a warm energy for this place of language and culture, which enlightens our mood and brightens our day.

Discover this exhibition at the Alliance Française in Canberra until the 27th of August.