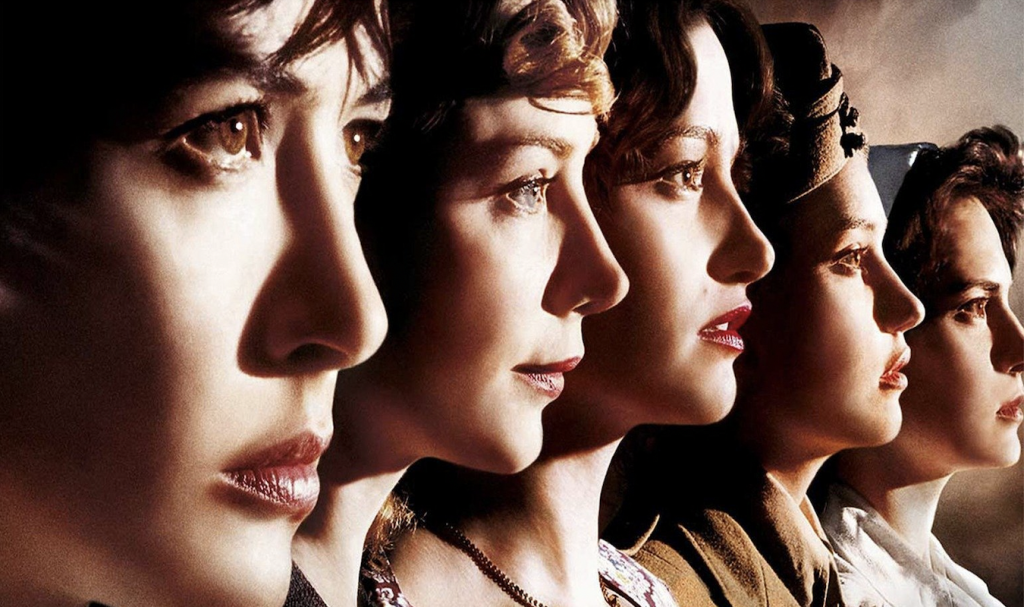 Female Agents (French: Les femmes de l’ombre) fights against the stereotypes of female involvement in war by telling the true story of four French resistance fighters working as part of the Special Operations Executive (SOE), a secret British spy operation created by Winston Churchill that was instrumental in the success of the D Day Landings in Normandy. These women, led by Louise Desfontaines (Sophie Marceau), a character based on real life French-Mauritian spy Lise de Baissac, are empowered figures, using far more than their feminine wiles to infiltrate and bring down the enemy.

Their task is to rescue a British agent (Conrad Cecil) who is currently in a German hospital after being attacked while completing geological analysis of the future Normandy landing site. Salomé keeps tensions high as the film moves between the efforts of Louise and her team and the actions of SS Colonel Heindrich (Moritz Bleibtreu) who is also tracking down the lost geologist, seeking to thwart the Allies’ plans.

Set in 1944 Paris, the film acknowledges the difficulties and prejudices faced by women in this period. However, their femininity is shown to be a strength and underestimating them turns out to be a dangerous mistake. Unlike many films, they are never asked to compromise their identity, with Louise and her hand-picked team of Gaëlle (Déborah François), an explosives expert, Jeanne (Julie Depardieu), a woman imprisoned for killing her pimp, and Suzy (Maire Gillain), a typist and cabaret dancer with contacts high in the SS, all proving to be valued members of the war effort.

At the core of this film is a message of unity, and so it makes sense that this story of French women working for the British military, alongside Jewish Italian countess and radio operator Marie (Maya Sansa) and German resistance fighters, was a co-production between France and the UK. There are classic spy and war film tropes throughout, many of which do lean into the classic portrayal of female spies including one ‘cabaret’ sequence used to distract the soldiers and military officers. However, such scenes demonstrate how these women are able to use the system that seeks deny them their agency to their advantage, playing on patriarchal expectations and outwitting the men that underestimate them. Considering the way that the film observes so many conventions of period films, with its lavish sets, costumes and rousing score, it’s interesting how Salomé subverts many assumptions of the genre by exploring gender norms, which resonates with contemporary audiences of all backgrounds.

Consequently, the film is remarkably real and moving in the way it renders the women and their struggles, contending with love, friendship and family in the context of a deadly war and a vital mission. The action sequences are exciting and well-staged, with shoot-outs set against a backdrop of iconic French locations – Parisian metro stations, beautiful country houses, and the train yards of Brest – but at its heart this film is about the desperation of these women to ensure the freedom of their country and its people.

Female Agents owes a lot to its predecessors, and it falls in a long line of war films set in Occupied France. Except, this female-led spin on the genre provides a new take, by centring the significant but oft-ignored role that women played in the underground war effort. The plot and emotional journey of Louise and her fellow spies feels fresh and thrilling, even with all its cyanide pills, secret passages and code words. Given the significance of D-Day in the success of the Allies, Australian audiences watching can gain new insight into the behind-the-scenes actions of a brave and selfless few facing unseen obstacles to ensure liberation. This is a highly enjoyable, well-acted piece, which centres women and their power.

Sophie Tallis is a writer and student of French and Screen Studies at the Australian National University, Canberra.