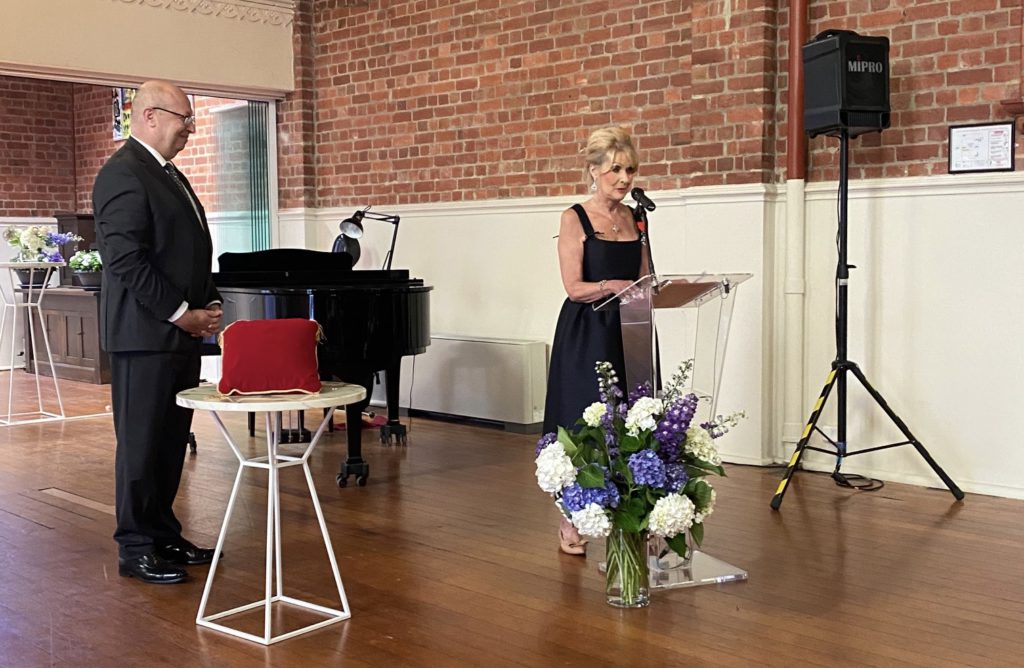 On 1 March, philanthropist Krystyna Campbell-Pretty was awarded the Légion d’honneur by the French Ambassador, H.E. Jean-Pierre Thébault. The French delegation including the Cultural Counselor to the French Embassy, Boris Toucat, the Cultural Attache, Karine Mauris, the Director of the Alliance Francaise de Melbourne, Johanna Durand, the Honorary Consul General of France in Melbourne, Myriam Boisbouvier-Wylie were delighted to attend a very moving and beautiful ceremony held in front of many proud family members and friends of Ms Campbell-Pretty. The Légion d’honneur, established in 1802 by Napoleon, is the highest French order of merit: Ms Campbell-Pretty became a Chevalier of the Legion of Honour for her contributions to French history, fashion and culture. Between 2015 et 2019, Krystyna Campbell-Pretty donated 190 haute couture dresses to the  National Gallery of Victoria, which covers the gamut of French fashion from the house of Worth to John Galliano and Alexander McQueen. Moreover, she has given many works of French art dating from the 17th to 19th centuries by artists the likes of Vigée Le Brun, Boilly or Largilliere. She also played an instrumental role in the creation of numerous exhibitions that showcased French art and culture of which “Napoleon” in 2012 at the NGV, “Masterpieces of Versailles” in 2016/17 at the National Gallery of Australia and “Cartier” de 2017/18 also at the National Gallery of Australia are only three examples. We congratulate Ms Campbell-Pretty and thank her for her contributions to the cultural links between France and Australia.