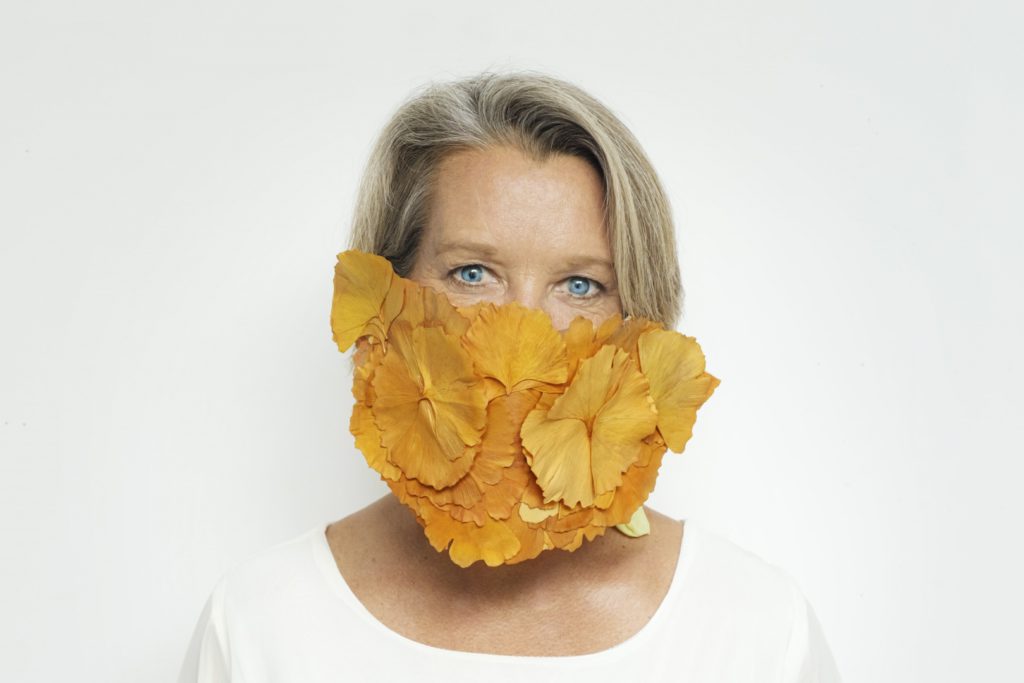 Maskbook is an international, participatory and artistic project by the non-profit organization Art of Change 21.

This mask was created especially for Layne Beachley by the artist Jane Laurence, as part of the Maskbook campaign for the 5th anniversary of the Paris Agreement.

Here is her message:

“My artwork is always about our relationship with the natural world. In my studio I have a basket of Ginkgo leaves as a type of talisman, as they are a sacred and symbolic plant representing eternal life. I immediately thought of their potential to become a mask, at such an important moment for the planet. The leaves are shaped like fans, resembling a mask used in Japanese ceremonies. Ginkgoes are “living fossils”. In the fall, their green leaves transition to saffron yellow, released in a sequence that creates a mystical golden-ray. The geometry of the leaf allows for a formation, as they fit one another and form circles, creating the pattern you see on the mask.The Ginkgo is a perfect representation of life moving into the future. A plant that can adapt and survive in so many parts of the planet, with some even surviving the atomic bomb in Hiroshima. It is so revered. It is perfect for inclusion in the celebration of the Paris Agreement.”

Method of creation: HandmadeMask created in 12/2020

This portrait was taken by Tim Bradshaw who graciously assign its rights to the Maskbook project.

The project started in 2015, on the occasion of COP21, in collaboration with Chinese artist Wen Fang.

It gathers almost ten thousands of participants, from more than 40 countries.

The protective mask has been used as the symbol and basis for this creative action.

The anxiety-provoking image of the protective mask is transformed into an expression of optimism and commitment to the planet.

Maskbook is truly a collective and engaged work of art, made up of masked portraits from around the world.

A selection of 1000 masked portraits of participants from over 40 countries around the world, are presented in the gallery.

Each mask is a personal creation, made from recycled materials (or very occasionally, made digitally). Each mask-creation is unique because it communicates its creator’s message in the face of the environmental crisis..

Maskbook workshops bring together thousands of participants around the world.

Nearly 200 workshops have been organized in more than 25 countries around the world, from Ecuador, to South Korea, Ghana, China, Kenya, Germany, India, Belgium, and France …

The Maskbook workshop not only provides the opportunity to practice the circular economy firsthand, but also, more globally, to offers a chance to take a first step for the environment, through ’committed creativity’.

80% of Maskbook participants say they are more optimistic about citizens’ ability to solve the environmental crisis. 70% of respondents said that Maskbook had favorably influenced their behavior in regards to the environment and favored, in one way or another, an “ecogest”.

Maskbook is a universal project, inclusive and accessible to all. The mask exists in all countries and resonates in all cultures around the world: from Paris to the Kangemi slum in Nairobi, from the boats of the nomadic Badjaos of Borneo to the city-dwellers of Shanghai, from Pokhora, Nepal to Quito, Ecuador, the Maskbook experience allows each participant to speak their truth and to rediscover the pleasure of creating with one’s own hands.

Maskbook relies on a global network of partners in the fields of the environment, education, and art.

Masktrotter, launched in 2018, is a project that renders the Maskbook project even more nomadic and inclusive. Globetrotters and adventurers, en route to remote locations, propose individual Maskbook workshops to locals they meet along the way. These Maskbook encounters promote an intercultural dialogue on climate change and air pollution. With the Masktrotter initiative, Maskbook also aspires to develop collaborations with the native people, and is already collaborating with the famous photographer Pierre de Vallombreuse, patron of Masktrotter.

Supported since 2016 by the UN Environment (United Nations Environment Program) and since 2015 by the Schneider Electric Foundation, Maskbook has been labeled COP21 and COP22 and is sponsored by the French Ministry of Culture.