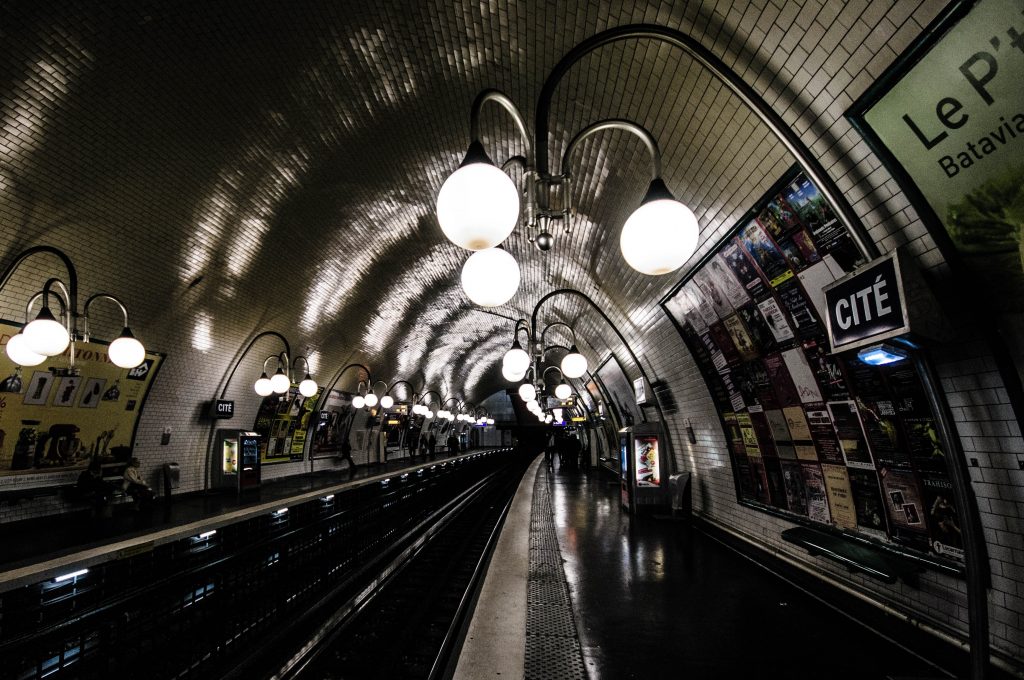 Paris isn't just about what’s on the surface but also what lies, and lurks, beneath...

PARIS ISN’T JUST about what’s on the surface but also what lies, and lurks, beneath.

There is, of course, the Métro, the practical underground transport where some stations also showcase art,
but there’s also the spooky catacombs, a sewers museum, an underground canal and caverns full of the good stuff – jazz, wine and cheese!

Extract from The Architecture Lover’s Guide to Paris by Ruby Boukabou (White Owl Books). Available globally in paperback and e-book. www.rubytv.net/books or via your favourite bookseller.

In such a compact city, the Paris Métro is one of the most practical and popular ways to get around town (although locals are also embracing the public electric scooters and pushbikes, especially in the past couple of years). There are over 300 stations with many more being created as line extensions. Civil engineer Fulgence Bienvenüe was the ‘father of the Métro’, with Line 1 inaugurated during the World Fair in 1900 and the rest of the original nine lines mostly completed
by 1930. Extensions have been made ever since, with fourteen colour-coded lines, many of them being extended to Greater Paris. Escalators were introduced from 1909, and now service most stations – but often only ascending (inconvenient especially with suitcases or if handicapped). Most stations are only around 500m apart (convenient!). While most are underground, some stations are situated above ground on viaducts. While the stations are relatively standardised,
some have stand-out features including:

A throwback to the Art Nouveau style with round globe lighting and high arched ceilings.

The Hôtel de Ville Art Nouveau entrance moved here in 1974. Scenes of the historic countryside of Montmartre decorate the staircase (though it’s the deepest station in Paris at 36m so be warned! There are also lifts/elevators’).

This central Métro station is a rabbit warren of connecting corridors. The many entrances include a replica of an original Art Nouveau kiosk entrance, constructed in 2000.

Opened in 1900 this station has replica Egyptian and international artworks in glass cases set against marble walls to remind you where you are!

Françoise Schein’s tiled walls are like a word game. Installed in 1989 to commemorate the 200th anniversary of the French Revolution, the letters reassemble the Declaration of the Rights of Man of 1789.

The interiors resemble a submarine with round portholes and rounded copper walls.

Tiled walls feature colourful depictions of the storming of the Bastille, local historic scenes and people (by artists Liliane Belembert and Odile Jacquot).

The newest and the first fully automatic line, constructed in 1998, travels from Saint-Lazare to Olympiades. The newer platforms are brighter with more space with clear tiles for the floors and higher ceilings.

There are a number of ghost stations that were either never used or have been closed, many since 1939 when France entered the Second World War. While some have been abandoned, others have been repurposed as film and tv sets
(Porte des Lilas station, as seen in the film Amélie), and homeless day shelters (Saint-Martin ghost station, situated between Strasbourg-Saint-Denis and République).
You can visit some of the ghost stations on Journées européennes du patrimoine (European Heritage Days) https://journeesdupatrimoine.culture.gouv.fr/ .

Métro 2030 is the name of the scheme to create a cleaner, more modern Métro by 2030. This includes LED lighting that uses 50 per cent less energy and over €5 million a year invested in refurbishing and modernisations.

Two building materials that define Paris, gypsum and limestone, were exclusively mined from land beneath and surrounding the city. From as early as the thirteenth century, gypsum was mined under Paris.
It is ideal for improving the workability of soil and for building plaster, hence the name ‘Plaster of Paris’. More notable is the iconic Lutetian limestone particular to this area that evokes Haussmann’s Paris.
Stone was reused from abandoned ruins and in the tenth century mines were dug horizontally into the sides of hills. As scaffolding developed, the mines spread deeper and further. In the thirteenth century the city was expanding and construction often took place on mined land, causing collapses. In 1777 renovations of the tunnels began. There was the enormous task of rediscovering and identifying the locations, which they did by engraving in the tunnels
the names of the streets above.

The story of the catacombs is both creepy and fascinating: in the late eighteenth century the cemeteries were overflowing. A solution needed to be found quickly before disease spread.
The answer was found under the plain of Montrouge, the former Tombe-Issoire quarries, which at the time was outside the city walls (now in the 14th arrondissement).

The Saints-Innocents cemetery was excavated first between 1785 and 1787– it had been used constantly for ten centuries! The bones were transported by night so as not to shock the public or the Church …
The site was renamed ‘Paris Municipal Ossuary’ in 1786 and nicknamed the ‘Catacombs’, which referenced the underground burial places under Rome.
By 1809 the underground passages of the dead were opened as an attraction to be visited by appointment.

These days there are over 550,000 visitors yearly. There can be a bit of a queue, so avoid school holidays or peak times where possible – or take a book to while away the time and a coat as you’ll be waiting outside.
The 1.5km circuit, lined with skulls, will take around an hour. NB: There are 243 steps. Only bags measuring less than 40x30cm are allowed and there’s no coat check.

Learn the history of the sewers and the variety of machines used within them on a tour of the 500m underground passage – if you dare. Haussmann’s, and engineer Eugène Belgrand’s, modern sewer system transformed the city,
making it much cleaner and less stinky. A tour will help you appreciate today’s relatively clean city.

Tunnel under the Bastille

The Canal Saint-Martin that connects the Canal de l’Ourcq to the Seine includes a 2km underground passage where the boats were once pulled along by workers, since it was too small for horses.
Gliding through can be somewhat thrilling, with the tunnel lit by the boat’s lights and large overhead circular skylights in the brick roof. Take a boat ride with Canauxrama (www/canauxrama.com ).

Attend a concert in one of the city’s famous jazz basements. Go swing dancing at Caveau de la Huchette (5 rue de la Huchette, 75005), get spooked by the past while warming up with some funk or afro jazz
at Caveau des Oubliettes (52 rue Galande, 75005), or get chatting to a young saxophonist or ten at a jam session at 59 Riv’ (59 rue de Rivoli, 75001).

You can also have an enjoyable time underground while trying some of France’s best wines and cheeses in a former royal wine cellar (Les Caves du Louvre, 52 rue de l’Arbre Sec, 75001 www.cavesdulouvre.com ).
Get tips from the expert sommeliers while you sip and take in the ambiance. Other wine bars include Frenchie (www.frenchie-ruedunil.com), La Cave de Belleville (http://lacavedebelleville.sordpress.com ) and La Cave à Michel (www.lacaveamichel.fr).

Extract ‘The Architecture Lover’s Guide to Paris’ by Ruby Boukabou (White Owl Books).
Order the book online via www.rubytv.net/books or at your favourite bookshop. Available in paperback and e-book. More Paris tips  from Ruby on www.rubytv.net and www.instagram.com/rubytv 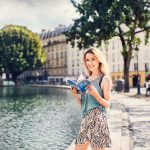 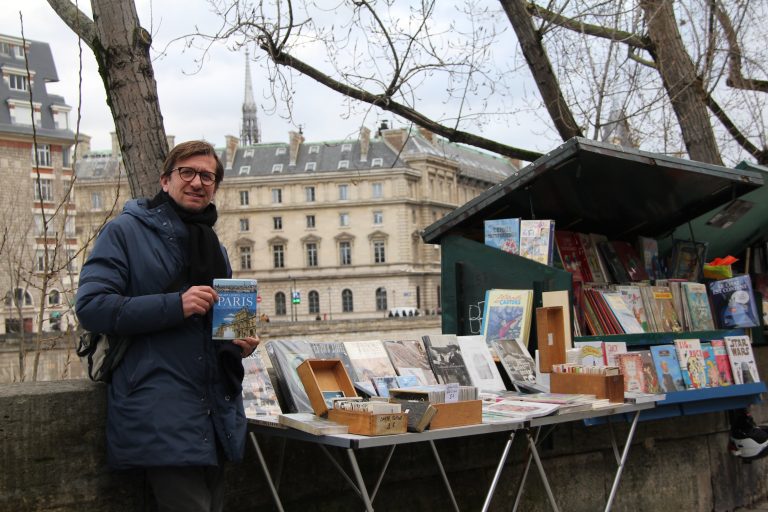 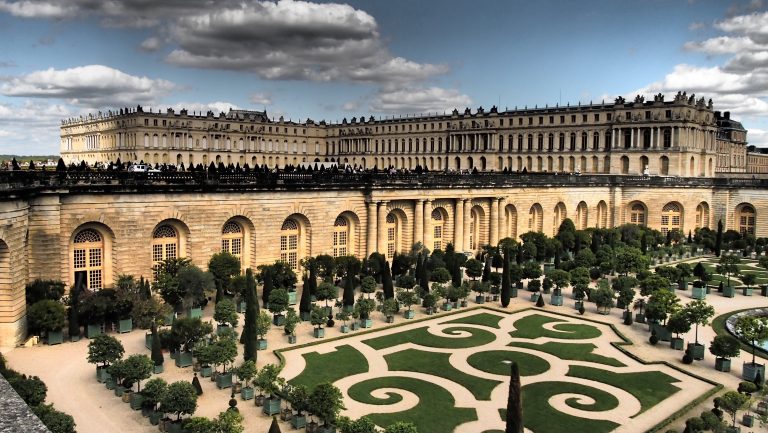